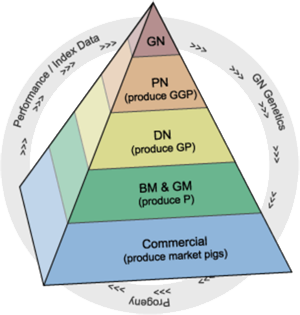 PIC's genetic improvement program utilizes the variation available in 17 different line populations worldwide. The performance of these lines, and the products derived from them, is measured in many different environments around the world, with the information collected in Genus's proprietary genetic database, PICTraq™.

These 17 lines provide the foundation from which PIC is able to satisfy the local market requirements of pig producers and pork consumers. In addition, custom improvement programs have been developed for a number of our customers who seek further differentiation of their branded pork. Attention continues to be focused on genetic dissemination and the reduction of genetic lag which allows our customers to realize genetic value faster than ever before in their operations.

PIC now utilizes CBV™ (Crossbred Breeding Value) to calculate the breeding values of PIC boars. This innovative system adds additional information from the commercial level to the boar's own test performance and PICmarq® genotypes. This is achieved by measuring the performance of crossbred sibs, sired by the same Genetic Nucleus (GN) herd sires, raised and processed in commercial environments. Breeding values are then estimated for realized genetic potential in real world conditions using both purebred and crossbred data.

CBV™ targets commercial crossbred performance, or in other words, realized genetic potential at the farm and plant level. This means that PIC now selects its pure lines and parent boars based on how their progeny are expected to perform in commercial conditions, rather than on performance of lines in the pristine GN environment. This enables a more accurate ranking of the boars according to their commercially expressed genetic value.

Data from crossbred pigs raised in commercial farms is being added to the system on a daily basis, allowing for constant updating of PIC boar indexes. This program ensures that customers receive boars selected using up-to-date commercial crossbred information for greater potential than ever to realize the genetic improvements made by PIC in their own farms and processing plants.

PICtraq™ is the industry's largest genetic database and is where PIC stores:

Information is entered into PICtraq™ 24 hours per day from nucleus and multiplier farms on every continent. PICtraq™ links all ancestors to account for performance and pedigree information, as well as the global movement of genetics. This linkage is invaluable in a breeding program designed to serve the global pork chain.

Using a statistical methodology called BLUP (Best Linear Unbiased Prediction), PIC calculates and ranks an animal's estimated breeding value or EBV using both individual and family performance information stored in PICtraq™. The EBV is the basis for genetic improvement and describes the value of an animal's genes to its progeny. EBV rankings are augmented with pedigree information to identify the matings responsible for the next generation of animals. Matings must be allocated correctly to optimize the rate of improvement and minimize the effects of inbreeding. To allocate matings, PIC uses an advanced technology that evaluates all possible allocations before returning a comprehensive mating list covering selections, matings, semen and embryo collection, inbreeding minimization, and the optimal use of genetic markers.